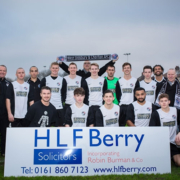 “We’re excited to be sponsoring this local football team and are really looking forward to a successful season,” says Paul Hannam of HLF Berry.

“HLF Berry has been providing legal services in the Manchester area for over a century now and we have an office in Chorlton as well as Failsworth and Manchester city centre.

“It’s great to not only have the opportunity to support the local community but to support a local football club that’s also been in the area for over 100 years.”

West Didsbury & Chorlton AFC was founded in 1908 as Christ Church AFC, playing friendlies at first and then in the Manchester Alliance League until the outbreak of World War One in 1914.

“The club has a rich past, changing its name in the early 1920s to West Didsbury AFC and then again in 2003 to reflect its new home of the Recreation Ground at Brookburn Road in Chorlton,” comments Paul Hannam.

“As a sign of just how far the club has come over the years, West Didsbury & Chorlton AFC now plays in the North West Counties Football League Premier Division, securing a 12th place league finish in August.”

Initially gaining promotion to the Manchester League Premier Division and entering the FA Vase in 2011, the football club was accepted into the North West Counties Football League Division One for 2012-13 and Premier Division after only one season.

Paul Hannam adds: “Recently, the club has enjoyed a 2-0 home win over Abbey Hey in the club’s first ever appearance in the FA Cup followed by a 2-1 first ever FA Vase victory away at NCEL Rossington Main near Doncaster in mid-September.

“We’re greatly enjoying sponsoring this local team, which is also based in Chorlton. The club is an established part of the local community and we will be cheering them on throughout the season and beyond.  We watched them win 2-0 recently against Rochdale which was a great boost.

“We’re committed to the local community and take every opportunity to support it. Our clients, both individuals and businesses, are embedded in the local area also and we feel it’s important to support a community we can all be proud of.”