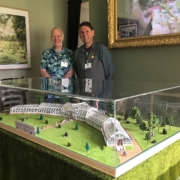 HLF Berry LLP has sponsored the construction of a new model of the glass cactus house in Alexandra Park that has been made by Phil Benson-Hannam.

Launched in Chorlton Lodge in Alexandra Park on the afternoon of Sunday 15th August during a relatively small invite-only event, because of Covid-19, the cactus house model will be on permanent display for visitors to the park and Lodge to see on the days that the Information Point/Heritage Centre/Gift Shop are open (Wednesday’s and Friday’s from 11 am until 2 pm and the first Sunday of the month from 12 noon until 2 pm).

“We’re delighted to have sponsored the cost of materials for the glass house replica as it’s wonderful to be involved in the community and to help with a project so steeped in local history,” says HLF Berry Solicitor, Paul Hannam who is also the Chair of the Friends of Alexandra Park Manchester.

“This model is a HO Gauge, 1:87 scale replica of what used to be in the park from 1906 until the early 1970s – and it’s lovely to have this addition to the Lodge now for everyone in and around Manchester to enjoy.”

The model was made by Phil Benson-Hannam as part of last year’s 150th anniversary of the opening of Alexandra Park in Manchester in 1870.

The original real cactus house was built to accommodate a large collection of cacti and succulents – a collection second only to the one that had been at Kew Gardens at the time – that had been left to the park and city council by a local business man called Charles Darrah from Heaton Mersey, Stockport, when he died.

The actual real cactus house was built in 1905/06 and had 5 rooms to represent the different regions and climates from where the cacti and succulents came.

Paul Hannam adds: “Alexandra Park is a special place and important to Manchester, with a strong history that stretches across the last century. The original cactus house was a feature for a big part of the park’s history and its replica is a welcome new addition. For information on the Friends of Alexandra Park Manchester please find them on Facebook or email friendsofalexandraparkmanchest@gmail.com.

“It’s been a pleasure to have helped in the creation of the model of the cactus house – HLF Berry Solicitors has been serving the local community in the Manchester area for more than one hundred years now and we’re always happy to support local projects.”

What is involved in taking on a commercial lease?
Scroll to top